What’s red and black with dead all over? Carnage takes on Deadpool once again in the mother of all sequels! At long last, Wade Wilson is ready to get his head on straight, so the Merc with a Mouth checks himself in to the prestigious Ravencroft Institute. Unfortunately, the facility has another new arrival: the psychopathic symbiote called Carnage! And he isn’t there for a therapy session! In their last battle, Deadpool ended up hosting five separate symbiotes – and now, that’s made him a prime target for codex hunters! The deadly Dark Carnage has put a target on Wade’s back, and the Marvel Universe’s most dangerous forces are on his trail! Deadpool’s only way out will give new meaning to Absolute Carnage! Madness and mayhem abound in the can’t-miss showdown of the year! Plus: Chewie’s been Carnagized, and Carol ain’t happy about it! It’s Earth’s Mightiest Hero against a symbiotic space cat! Collecting ABSOLUTE CARNAGE VS. DEADPOOL #1-3 and ABSOLUTE CARNAGE: CAPTAIN MARVEL #1. Parental Advisory 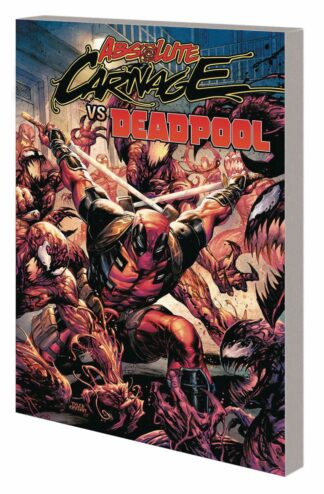