Lex is hanging over the side of a building. His three captors goad him but Lex is quietly confident and he thinks back a week to when he’d taken full control of Lexcorp back. Lex has become consumed with desire – the desire for power. Using all the skills of his research and development team, he has them trying to locate Lantern rings. One thing we know about Lex is that ‘No’ is not in his vocabulary. When an employee tries to relay the impossibility of the task Lex has him fired and blacklisted. In retaliation the scientist cracks Lex over the head with a nearby ornament. Lex, days later, is enjoying a meal with his once upon an ex Lois Lane. Lois questions him over the bruise and her comments drive the CEO to order a hit on the former employee. Oddly though Lex draws a line under the whole thing, Lois makes him stop and think, even challenging him as an overreacting fool for his quest. Although angry at Lois’ comments he reminisces to his time as an orange ring-bearer during the Blackest Night saga. He admits to Lois that this lust for power is his jealousy to BE a Superman. So much so he has even had cgi simulations created to see what would happen if he still owned a ring – or all of them even. He would become better than anyone, more powerful than any metahuman. Lois spots something in the simulation – Lionel Luthor, long dead, which brings Lex onto his next point. Black Lantern rings. Those resurrecting rings dissipated into energy and began to fade when the battle was won. That energy isn’t gone – it’s out there with the building blocks of their power ready for Lex. The morning of the kidnapping, Lex is inspecting the damage left behind after the 100 minute war. He and his assistant Spalding comment on Superman’s journey across America (see Superman #701). Lex surmises it’s Superman’s quest for more power. Lex is confident that by the end of Superman’s quest he will have acquired the power to surpass his enemy. Activating sensors he looks over data catchment, unrivaled monitoring equipment he hadn’t used since Superman’s first appearance. Superman and his allies are all under close watch – to a degree. Supergirl is a red-blue blur in the Metropolis skies. Steel has become reclusive but still attempts to earwig Lexcorp intel. Superboy is for some reason sticking to Smallville. Mr. Luthor orders Spalding to activate the Isopod, an untested holographic memory organizer and scenario calculator which draws data from the web and its inhabitant – in this case, Lex. The data collected reviews a ripple effect off energy caused by the disintegrating Black Lantern rings. Lex is able to fashion a ‘treasure map’ to all the sources of energy he could need to make his OWN ring. Lex powers up his battle suit and peels Lois’ skin off to reveal an adapted Brainiac probe bot. It turns out Lex fashioned the Lois ‘fembot’ to be his ‘voice of reason’ but before there could be further investigations the kidnapping begins. Even Lois going all Terminator 3 on the assailants they still manage to grab Lex and then we’re back to the present with Lex over a building. Two of the three kidnappers are silent but the last one is a little too talkative and begins to beg itself not to die. That doesn’t work and he begins to rip his own flesh off to reveal who he is from within his human cocoon… MR. MIND! 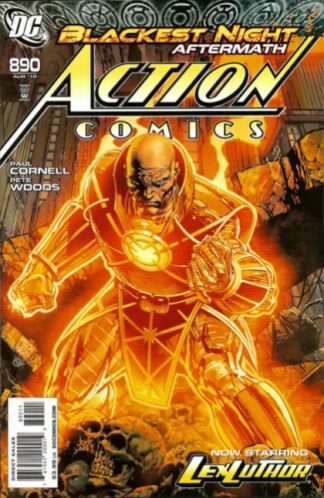