Randy Stradley (W), Rick Leonardi (P), Mark Pennington (I), Wes Dzioba (C), and Raymond Swanland (Cover) On sale May 19 FC, 40 pages $3.50 Miniseries This time it’s war! The forces of the shaky alliance between the ‘hunter’ Predators and Colonial Marines hits the beachhead established on the former colony world of Caparis VII by the enemy Predator clan and the Alien warriors under their control. No quarter is asked, and none is given as the Marines and the Hunters intend to destroy their foes, and the Aliens and their Predator masters are fighting for their lives. But as the attack unfolds, Machiko Noguchi suspects that the allies have made a fateful blunder-and no one in command will listen to her warning! Featuring the creative dream team of original AvP writer Randy Stradley, superstar penciller Rick Leonardi, inker Mark Pennington, colorist Wes Dzioba, and stunning cover artist Raymond Swanland, Aliens vs. Predator: Three World War ties together story threads introduced in the 1989 AvP series and new Aliens and Predator story lines, setting the stage for the most epic AvP brawl ever imagined. o With a new film expected this year, demand for these titles is sure to be high. ‘Here’s hoping the people holding the reins of the movie franchise are paying attention, because this book already sounds better than both AvP movies put together.’ -GeekWeek 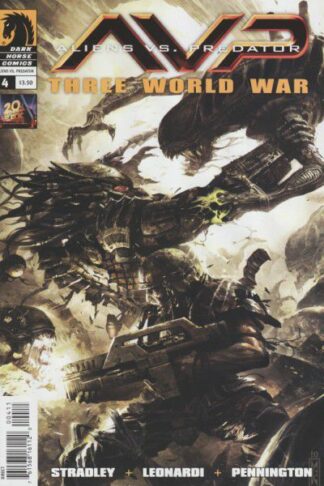