Progenitor of the famous Pym Particle, biochemist Dr. Henry Pym started off his super-heroing career as the tiny Ant-Man, but he soon burst into a new role as Giant-Man! The Avengers co-founder’s adventures with the Wasp continue here as the two heroes beat back the Beast of Berlin and battle other adversaries big and small! Then, there’s a new Giant-Man on the block when Pym’s friend and lab partner, Bill Foster, becomes the Black Goliath in a series all his own! Last, but far from least, thrill to the debut of Scott Lang as Ant-Man, the small hero who’s made it big both in Marvel’s comics and on the silver screen! Collecting MARVEL FEATURE (1971) #4-10, POWER MAN #24-25, BLACK GOLIATH #1-5, CHAMPIONS (1975) #11-13, MARVEL PREMIERE #47-48, and material from TALES TO ASTONISH (1959) #60-69 and IRON MAN (1968) #44. Rated T

Title: The Man In The Ant Hill 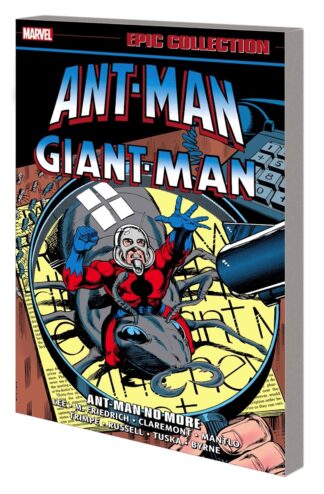