A+X shakes things up with its first book-length story as Captain America and Cyclops find themselves on a collision course! Cap is hell-bent on arresting the fugitive Cyclops, but that’s only half of this duo’s troubles. They also need to defeat a horde of menacing Skrulls and find Professor X’s former students, the Skrull mutants known as Cadre K! But there’s more! Emma Frost and Black Widow team up in a steamy saga! Magneto encounters the Superior Spider-Man! Dr. Strange and Beast face a truly insane threat! A heartbreaking story from the past of Spider-Man and Psylocke! Iron Man teams with fan-favorite X-student Broo! And Brian Michael Bendis pens a very special A+X tale! Featuring the Marvel writing debut of Max Bemis of the band Say Anything and Jeff Loveness, Emmy-nominated writer for Jimmy Kimmel Live! Collecting A+X #13-18. 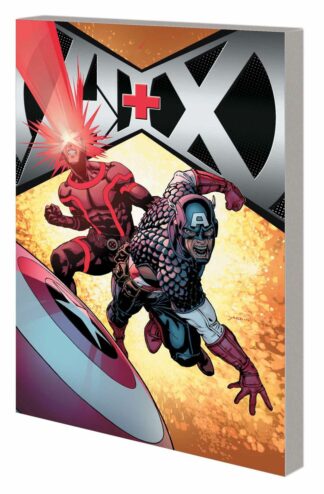