Written by Geoff Johns & Allan Heinberg Art by Chris Batista & Mark Farmer Cover by Rags Morales A new volume collecting the amazing sequel to IDENTITY CRISIS from JLA #115-119, written by Geoff Johns (INFINITE CRISIS, JSA, THE FLASH) and Allan Heinberg (The O.C., Young Avengers) with stunning art by Chris Batista (LEGION) and Mark Farmer (JUSTICE LEAGUE: THE NAIL)! In the wake of IDENTITY CRISIS, the JLA decides the time has come to tell Batman that they stole part of his memory. But, the League is attacked by the Secret Society of Super-Villains – out for vengeance now that their own memories are restored. As the JLA battles, the Martian Manhunter confronts Despero – the alien conqueror and the one behind the villains’ memory-restoration. By the time the dust settles, the JLA may have won the battle but lost the war! 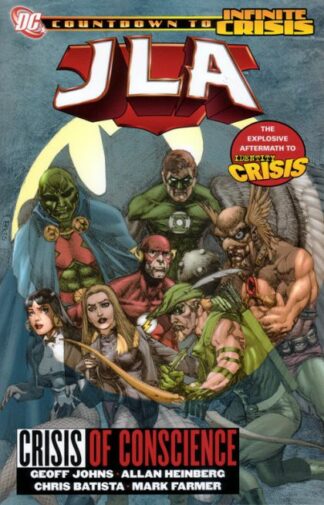