View basket “Prison Pit – Volume 2B” has been added to your basket.

The balls-to-the-wall series returns this summer with more action and mayhem like only Johnny Ryan can deliver-again starring CF, the shirtless outer space barbarian antihero who remains damned to the Prison Pit (a vast wasteland beneath the crust of a barren planet, populated by the worst of the worst, where violence is the only law and evil creatures roam free). In Prison Pit: Book Two, the second graphic novel in a trilogy, CF tries to get revenge against the evil behemoth that took his arm, and then winds up playing an unwilling participant in an elaborate escape attempt from the Pit. Prison Pit blends Ryan’s fascination with WWE wrestling, grindhouse cinema, first-person action video games, Gary Panter’s ‘Jimbo’ comics, and Kentaro Miura’s ‘Berserk’ Manga into a brutal and often hilarious showcase of violence like no other comic book ever created. 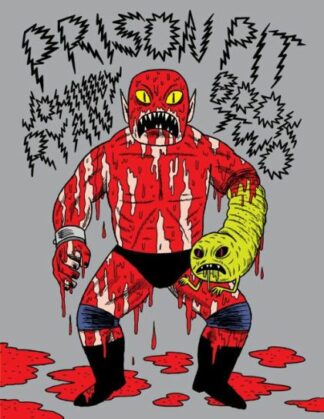