Written by ORSON SCOTT CARD Adapted by ROLAND BERNARD BROWN Penciled by RENATO ARLEM & MIGUEL MONTENEGRO Cover by MIGUEL MONTENEGRO In an alternate history of the American frontier, Andrew Jackson is a lawyer from Tennessee, William Henry Harrison has set himself up as governor of Carthage City, and Napoleon is leading an army just south of Detroit. But this is a world where folk magic actually works – and where a young boy who is the seventh son of a seventh son has the power to shape the world around him at will. This is a tale of Alvin Maker, an extraordinary man who is destined to change the world and build a magnificent Crystal City. But the Unmaker stands in his way, determined to stop Alvin from fulfilling his destiny. And with a violent war brewing between the settlers and the local tribes along the Mizzipy river, Alvin will find himself in more danger than he ever could have imagined? Adapted from the novel by New York Times Best-Selling Author Orson Scott Card (ENDER’S GAME), RED PROPHET: THE TALES OF ALVIN MAKER is an incredible adventure through history and speculation, fusing high fantasy with the spirit of the American Frontier. 164 PGS./Rated T+ ?$19.99 RED PROPHET: THE TALES OF ALVIN MAKER VOL. 1 HC (BOOK MARKET EDITION) 164 PGS./Rated T+ ?$19.99 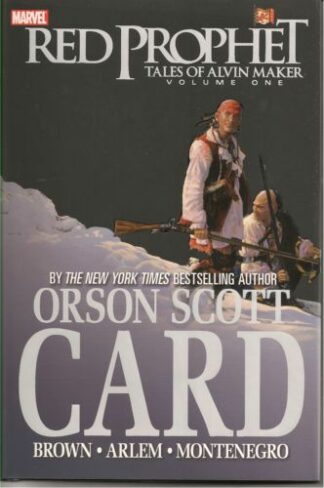