The smash-hit, most-talked-about comic of 2021 is back with its second “season” and trade paperback! Collecting the four-issue comic book series Red Room: Trigger Warnings, with tons of extras! In this second Red Room collection, fan-favorite the Decimator presents… The Rat Queens! And unfortunately for them, they’re front and center in the Decimator’s most horrific red room broadcast yet! Also, hoodie horror comes to Red Room by way of the Punkinz: two sociopathic, aspiring red roomers who quickly make a name on the scene with their amateur snuff films. Fueled by a mutual passion and talent for murder, the young sweethearts aim to be the most notorious and wanted killers on the dark web… Plus, much more, including the island of Pitcairn, home to a native civilization that has been sacrificing their people to the gods for generations in hopes for a good crop season – until bitcoin pirates discover the uncharted island and hatch their own plans. The book also includes Piskor’s exclusive “Director’s Commentary” for virtually every page, tons of process art, sketchbook material, and other surprises exclusive to this collection. Red Room’s first “season,” The Antisocial Network, was the breakout smash-hit comic book series of 2021, with over a quarter-million copies sold of the series to date. Who are the red room killers? Who are the victims? Who’s watching? Who can stop it? Trigger Warnings escalates the stakes, with Piskor pushing his masterpiece of modern horror in new directions and delivering the cyberpunk, outlaw, splatterpunk goods as no one else can. 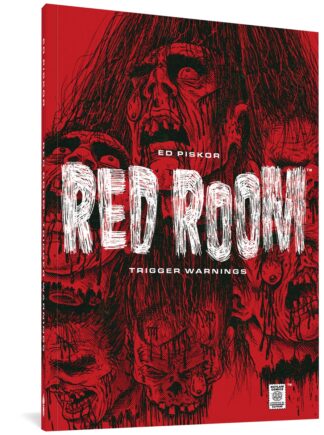