Plot Summary Pavitr Prabhakar is having recurring nightmares for the past few nights. Uncle Bhim comforts him and tells him to be strong. Later, Pavitr overhears a conversation between his uncle and aunt Maya about his future studies. Uncle Bhim thinks that Pavitr deserves a chance to complete his studies and they will manage somehow. After that, they come to Mumbai. Pavitr’s first day to school is an unpleasant one. The other students see his rural clothing and taunt him. But another girl, Meera Jain comforts him, saying that she too is from a village. She tells Pavitr to be strong and ignore the rude comments of the other students. Meanwhile, Mumbai’s top crimelord, Nalin Oberoi wants a mystic amulet and will do anything to get it. He is reported that the village where it has been found, is not willing to part with it. Nalin orders the village to be burned and destroyed. Pavitr meets his uncle on the river bank and tells him about his distressing experience at school. Uncle Bhim tells him that he understands. He tells Pavitr that ” with great power there must also come great responsibility “. Nalin Oberoi conducts a ritual with the mystic amulet. Shortly afterwards, a ligntning bolt captures Nalin in its path, feeding his body enough power to transform him into the “Green Goblin”, a very powerful demon. That afternoon, Pavitr is running in an effort to escape a group of bad boys, when he runs into a sadhu. The Sadhu transports him into another dimension and tells him the story of the universe. He tells that dark forces are beginning to gather on Earth and the planet will need a saviour. He gifts Pavitr the “power of the spider”, and vanishes. Next, Pavitr finds himself standing atop a tall building. He glances at his new red and blue attire, and dons his mask. Quickly he discovers his amazing powers and swings away into the heart of the city. Pavitr is swinging on web-lines when suddenly he hears a woman cry for help. He halts but prefers to stay out of trouble when he sees the muggers. But his folly is a great one. Uncle Bhim steps into the way of trouble and gets stabbed fatally. Pavitr realizes his mistake and takes off after the gang. He spots them in an autorickshaw and crashes it, bringing them down. So great is Pavitr’s rage that he is on the verge of killing them. But that does not happen. He trusses them up and leaves them for the police to find. Pavitr glances at his dead uncle one last time and climbs atop a tower. He realizes his folly and vows to use his powers for good deeds. 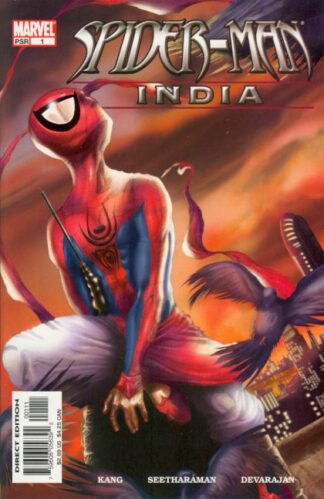