Samuel Sterns aka the Leader was a simple American worker in a chemical plant in a menial capacity until an accident working with radioactive material bombarded him with  gamma radiation, turning his skin green and making his head grow. The radiation increased his intelligence to genius-level along with his ego and ambition to match. This led him into conflict with the Hulk becoming his self-proclaimed arch-enemy. Having died and being revived several times, the Leader became obsessed with the afterlife, having experimented with the Green Doors and learned of the existence of the One Below All and the  Below-Place, though all of this would culminate in him being possessed and then ripped out of the entity, powerless and reduced to a normal human. In spite everything he had done, the Hulk forgave Sam and returned him to the Earthly Plane 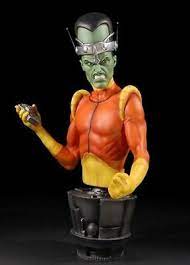