Adam hears the woman’s story about how Sardath used a computer to select Rannians who were most likely to be able to reproduce together. She was selected to marry Sardath and they had a daughter, Alanna, but they fought and he had her exiled from the city. She found a community of exiles who desperately eked a living out of the wasted land until Swamp Thing made their land bloom overnight. The community even had its first pregnancy recently. It’s then that the woman then suggests that the reason Sardath has treated Adam so well was in order to repopulate the planet. She points out how suspicious it was for a communications beam to wind up teleporting someone instead. As they arrive at Ranagar on a flying creature from the wastelands, they see it in flame. Inside the city, Eve had been found and taken prisoner. She winds up using her skills as a nurse to aid Alanna, who has gone into labor. Sardath returns, but his wounds have left him blind in one eye and a faulty medical machine seems to have altered his personality, making him more flamboyant, if not insane, than his earlier colder, scientific self. Adam and Alanna’s mother join the group, and Eve has some harsh words in private with Adam for his cheating on his wife. Adam heads out to fight against the attack on the city while Eve and Alanna’s mother care for Alanna, who Eve realizes is going to die in childbirth. Alana realizes that the older woman is her mother, gives birth, and dies. As a fleet of rebel ships heads towards Ranagar, Adam Strange seems to give up and heads inside to die with his wife — only to learn that she’s already dead. Sardath has rewired the city’s technology, apparently insanely, making it look like a terrible mess. When he activates it, however, the entire city lifts off from the ground surrounded in a force field that protects it from the invading but not-quite-arrived ships. Like an egg, it lifts off the largely wasted planet and heads into space. On the space arc that Ranagar has become, the new Sardath expresses a newfound joy in nonsense — a very postmodern concept. He explains that Adam went crazy going through the Meta Zeta Beam while Eve experienced no negative effects because of the Zeta Beam radiation already in Adam’s body. With her experience on Earth, Eve is acting as an expert on democracy as a new government is formed. Holding Adam’s daughter, who has been named Aleea, Eve talks to a mopey Adam Strange and convinces him to overcome his grief and attend the meeting that night that will decide on the new government. He carries Aleea in his arms, apparently for the first time, as they walk back together.

Storyarc: The Man of Two Worlds 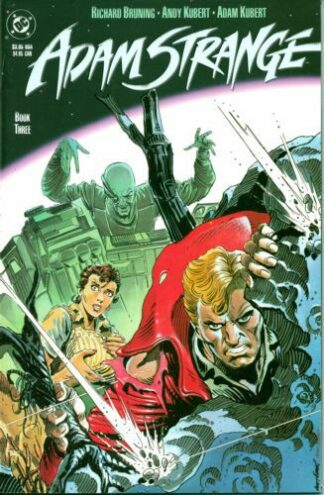